Do you live in Connecticut or Nearby? EatThePlanet.org is now offering in-person foraging classes. Hopefully you can make it to our July class. Click Here for more information and to sign up. Please email me directly at eattheplanet.org@gmail.com with any questions.

History of the Bulrush plants

Bulrush is a type of sedge plant that is a part of the Cyperaceae family. Two species of bulrush discussed in this post today include the hard-stemmed bulrush (Schoenoplectus acutus) and the soft-stemmed bulrush(Schoenoplectus tabernaemontani). This variety of plants grow in wetlands, and specifically for bulrush varieties, the wetlands in states including Connecticut, Vermont, Maine, and New Hampshire. However, bulrush is native to the western coast of the United States and has been a reliable plant for various Native American tribes.

Tribes including the Cree, Navajo, and Raman, utilized bulrush root and rhizomes in traditional medicinal ways. The stems of both varieties were harvested, then turned into a poultice for treating wounds, stopping bleeding, and recovering from snakebites. The stems were also used in food and crafting, including the seeds being pounded into flour and the stems used to make baskets, brooms, hats, and rafts. Parts of the bulrush plants that are usable include the stems, roots/rhizomes, pollen, and the young shoots.

Schoenoplectus acutus, known commonly as Hard-Stemmed Bulrush, is native to North America and can be found on both the eastern and western coasts in the northern region. Hard-stemmed bulrush is also known by its alternative name Hard-stem Clubrush. You will most commonly find this plant in wetlands, but not in the southwestern regions, such as Louisiana and Florida. This plant is a part of a family of plants called sedges and is a perennial.

Bulrush is a tall grass-like plant and tends to grow best in places such as marshes. Hard-stemmed bulrush is identifiable by the number of spikelets and scales on the fruit the plant produces. Hard-stemmed bulrush’s name partly comes from the firmness of the plant stalk. The spikes are found at the end of the blades of the plant, which branch out in clusters, and are between 10 and 17 millimeters long. These clusters can include a number of spikelets, from three to 40 in a single cluster. On the stem of the plant itself, you will find between three and four leaves at the base, then two farther up the stem. The fruit, or seeds, develops during the summer months and each has a set of scales, which reach between three and four millimeters in length, and two to three millimeters in width.

Soft-stemmed bulrush is quite similar in appearance to hard-stemmed bulrush, except this variety has more spikelets, and the seeds vary slightly in scale size. Soft-stemmed bulrush also has three to four leaves that grow at the base, but at the top, anywhere between 15 to 200 spikelets can appear. These spikelets will often grow in singular formation, but can also grow in clusters, of groups between two and four spikelets. The scales on the seeds reach between two and three and a half millimeters in length and one and a half to two millimeters in width. 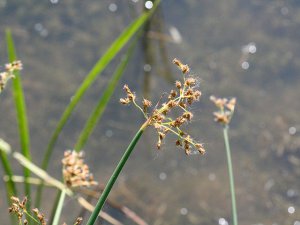 Precautions and Wrap Up

The first important notion to remember when foraging these varieties of bulrush is that, in select states, hard and/or soft-stemmed bulrush is identified as either threatened or endangered. In states such as Pennsylvania, bulrush is protected as an endangered plant, so before setting out to forage, research what plants are threatened and endangered in your region. Also, because bulrush grows best in wetlands, harvesting the plant can be extremely difficult without the proper equipment and clothing. Finally, in their family, there are over 700 species categorized under Cyperaceae, and the eight primary bulrush plants all look quite alike.

The roots are hearty and have been said to have a subtle sweetness to them, so do not be discouraged and familiarize yourself with a plant that has helped many tribes throughout history. Just be aware of how much you harvest, and remember to be mindful of the environment around you.

Many of our readers find that subscribing to Eat The Planet is the best way to make sure they don't miss any of our valuable information about wild edibles.
our facebook page for additional articles and updates.

Both members of the mint family and Lamium genus, henbit (Lamium amplexicaule) and dead nettle (Lamium purpureum) are common finds on winter walks and spring

Have you ever noticed the tangle of wild roses growing along tree lines or among the hedgerows? Come late summer or early fall, the petals

For decades many people’s response to a pounding headache has been to take a couple of aspirin with some water. What most don’t realize is

One of the most commonly available seaweeds a forager can find is Sea Lettuce (Ulva lactuca). A member of the Ulvaceae family, sea lettuce has

Written by Amy Demers of the Connecticut Foraging Club Reishi Mushrooms (Ganoderma sp.) have been used medicinally for over 2,000 years in Asia to promote