A message from EatThePlanet.org: "We are happy you found us! We strive to be informative and accurate. Enjoy what you find here! Take a look at our new downloadable pdf eBook A Complete Guide To Foraging. We put a lot of work into this eBook and are very excited to share it with you." - Joe Forager(Owner) 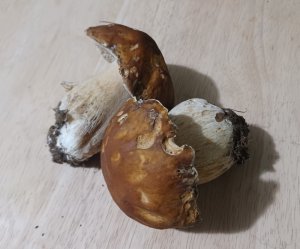 Fall is a fabulous time for fungi, particularly in the temperate forests and meadows of the northern hemisphere. And there are few mushrooms that are as impressive—and widely appreciated—as the king bolete (Boletus edulis).


King boletes are found in forests and nearby clearings; in the United States they are most common on both the east and west coasts, the Rocky Mountains, and around the Great Lakes region. They have mycorrhizal relationships with both conifers and deciduous trees. “Myco” means fungus, while “rhizo” means root, and the mycelium of this Boletus species grows around the roots of its partner trees so they can feed each other nutrients and thereby both benefit. King boletes may be mycorrhizal with several species of fir, pine, spruce, and hemlock, as well as oak, beech, birch, chestnut and other deciduous trees. While the presence of any of these trees isn’t an absolute guarantee that you’ll find king boletes, they’re a good place to start. Incidentally, they often frequent the same places that Amanita muscaria does, so if you see this bright red and white mushroom, keep your eyes peeled for boletes, too.

While king boletes may pop up anytime in summer and fall, the best time to look for them is after the first good autumn rains. Fungal mycelium need a certain amount of hydration in order to move enough nutrients around to produce mushrooms, and so it may take several days of solid rain before mushrooms of any sort start to appear. Drought can delay or even block their appearance entirely, and once the first frost hits it usually puts a stop to king bolete fruiting as well.

Also known as the porcini, this is one of the easiest boletes to identify. They look rather like a well-browned bread roll or bun on a thick stalk growing out of the ground. Particularly large specimens may approach a foot in diameter. And if you look closely at the stipe (stalk), you’ll notice a distinctive reticulated pattern that looks like white netting stretched over a brown background.

Boletes have sponge-like pores rather than thin gills on the undersides of their caps. Young specimens have white pores; as the mushroom gets older, these pores can turn yellow, or even green on occasion. Slicing a king bolete in half shows a completely solid center, other than some small cavities in larger mushrooms that have been heavily bug-eaten or have begun to decay. In fact, this species is notorious for getting “buggy” within a few days of sprouting out of the soil, as slugs, worms, and other invertebrates happily feast on it. Therefore the sooner you can pick these choice edibles, the better.

There are other bolete species that look similar to king bolete, both in size and coloration. Not all of them are in the genus Boletus, but still share the family Boletaceae. This can lead to confusion when people are discussing “boletes” more casually and are referring not to a Boletus species, but perhaps a Suillus or Leccinum. One of the closest look-alikes, for example, is the birch bolete (Leccinum scabrum, formerly Boletus scaber.) While it, too, has a large brown cap, the stipe is heavily peppered with dark spot, and the birch bolete is a bruiser. Never heard of bruising boletes? These are members of the Boletaceae that change color when damaged. New mushroom hunters may be cautioned against eating any bolete that stains blue (though some non-Boletus species, such as a selection of edible Xerocomellus species, also bruise.)

Circling back to the king bolete, Boletus edulis does NOT bruise, so if you cut your suspected porcini and it doesn’t discolor within 15-20 minutes, it’s more likely your identification is correct. So, to recap:

–Large mushroom with brown, bread-like cap and white or yellow spongy pores underneath

–Mostly solid inside other than worm holes

–Does not bruise when damaged

How to Prepare and Store King Boletes

These are a very versatile species. If you haven’t ever eaten king boletes before, the best way to get a good sense of their flavor is a simple sauté in butter or olive oil. Make sure you cook them thoroughly, as undercooked boletes can give you an upset stomach. Also, eat only a small portion the first time, as even edible mushrooms can disagree with a minority of people.

Some people find the pores to be too chewy; you can cut these off, slice them very thin, and dehydrate them. Crumble them on salads or eggs, or powder them and mix them with other seasonings; porcini powder confers a nice, savory umami flavor to dishes. The top of the cap and the stipe can be used in other recipes, from soups and sautés to omelets and mixed roasted vegetables and mushrooms.

If you find you have too many king boletes to reasonably eat now, they lend themselves well to either drying or freezing. You can dry them to cracker consistency in a dehydrator, on a baking sheet in an oven, or even in a well-ventilated sunny room or porch. If you’re going to freeze them, I find they do best when sautéed first, but they can also be frozen raw after being sliced. Put the boletes in air-tight containers before popping them in the freezer, and then thaw whenever you want to add them to a recipe.

—————
Written by Rebecca Lexa
Rebecca Lexa is a certified Master Naturalist in the Pacific Northwest. She teaches classes on foraging and other natural history topics, both online and off. More about her work can be found at http://www.rebeccalexa.com.

Morels: Worth the Effort!

There are a lot of wild mushrooms that are considered inedible and even toxic. But a few may be lethal if consumed in sufficient quantities–and

The days grow shorter, and the weather chillier. While fall is often seen as mushroom hunting prime time, winter is a less appealing time to

When you see evergreen trees is your first thought to consume them? Probably not.   However, you may want to reconsider as pine needles are

Chanterelles are among the most prized of wild edible mushrooms. Their rich flavor and texture make them versatile additions to recipes, either as a side

It’s a beautiful fall day, and you’re walking through the woods looking for edible mushrooms. As you come across one of your favorite “secret spots”,

Walk around clearings, forest roads, and even gravel driveways in fall, and you might just run across the orange peel fungus (Aleuria aurantia). It